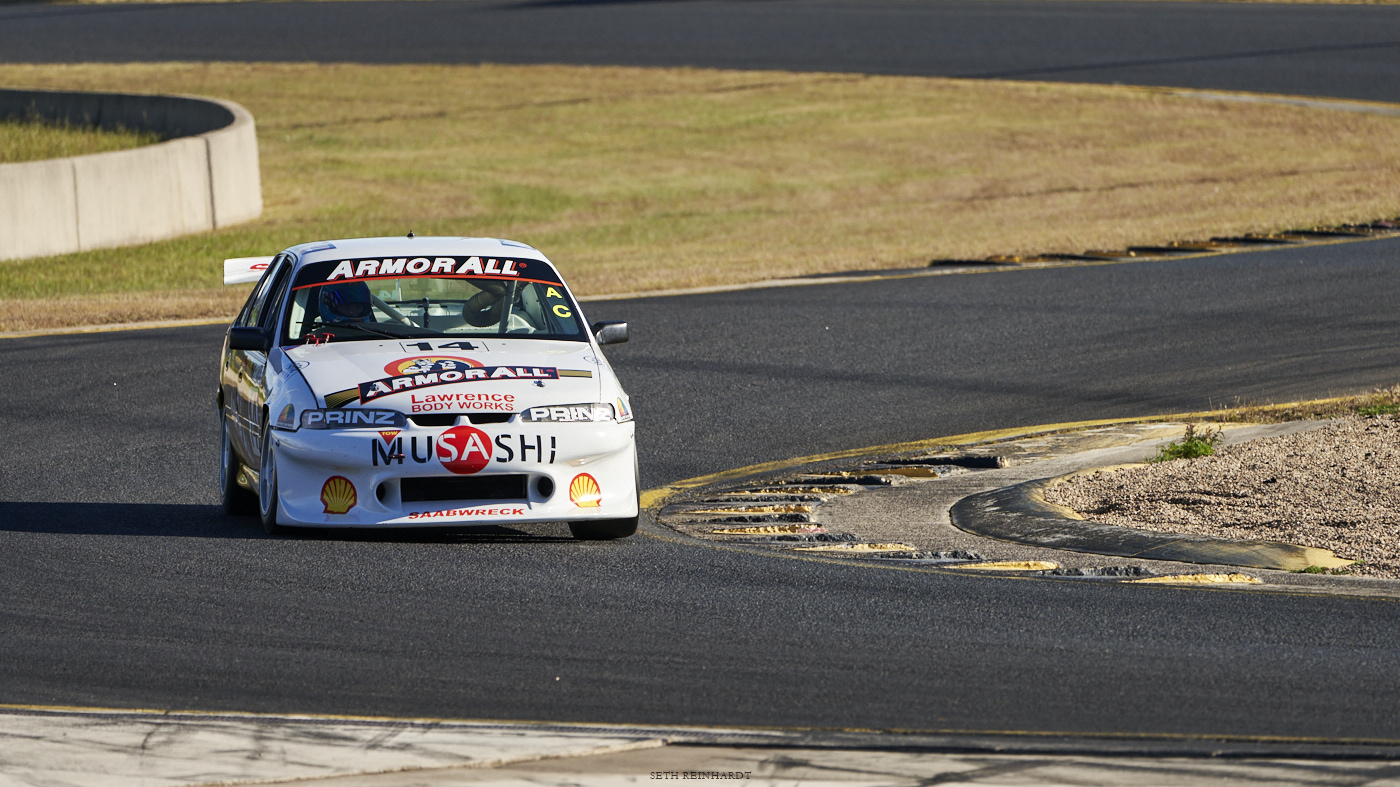 After making their debut with the club at the 2021 HSRCA Sydney Classic, Australian 5-Litre V8s have put together a magic field of iconic V8 Supercars for this weekend’s meeting. Joining a strong field of Group C & A touring cars and near-capacity grid Group N touring cars, we’re looking forward to a truly remarkable event for fans of tin-top racing. Let’s get to know a few of the cars that you’ll be able to catch in action over the weekend.

Peter Abood will run a 2008 Holden Commodore VE campaigned by Paul Morris in his last full season as a full-time driver. The car raced at Bathurst in 2008 with Matt Neal and Boris Said, but spun at Murray’s corner on the last lap of the race (having completed 140 laps) and scored a devastating a DNF.

It returned to Bathurst in 2009 with Dean Fiore and Troy Bayliss at the helm, but didn’t fare much better, Bayliss crashing out on lap 59 in the dipper. The car went on to run Super3 with Jack Sipp between 2014 and 2016, until Paul Morris restored it back to its 2008 specification in 2021.

Jacob Khouri’s 2007 Ford Falcon holds multiple race victories in both the V8 Supercars Championship and development series, including a career-opening win on its debut in 2000 at Sandown, with ‘The Rat’ Paul Radisich at the helm. Later the same year, it was co-driven by Jason Bright at the Bathurst 1,000.

In 2001, it was handed over to Steven Johnson for most of the season, who drove it to victory at the Canberra street race. It was subsequently used as a third Dick Johnson Racing entry for Greg Ritter before being handed back to Radisich. Alan Jones had his final Bathurst 1,000 start in this car in 2002.

After changing hands a few times and spending several years in the development series, this car was neatly returned to its former Dick Johnson Racing livery and has featured in several Australian 5-Litre Touring Car events.

Jamie McDonald has been a Heritage Touring Car competitor for the past 17 years aboard the Masterton Homes VK Commodore. The custodian of Bob Pearson’s VN Group A Commodore, which he was slowly restoring from Supercar to Group A guise, he was presented with the opportunity to add the sister car to his collection.

In 2014 Jamie bought Bob Pearson’s ex Pro-Duct VP Commodore, used for the Australian Touring Car Championship between 1993 and 1995, and set about restoring it. After a two year restoration enlisting the help of Ron Missen, the car made its return with the Australian 5 Litre Touring Car Association at Sydney Motorsport Park in 2016.

Jamie will be piloting both of his ex-Bob Pearson Commodores at the Sydney Classic, doing double duty in Heritage Touring Cars C & A races and Australian 5-Litre Touring Cars events.

Andrew O’Conell’s 2001 AU Ford Falcon was debuted by Mark Noske in the Konica series in ’01. Later that year it was driven by Noske and Craig Baird at Bathurst, before it was sold and run in VIP Petfood livery in 2002, starting from pole at the Canberra 400.

In 2003 it was raced by David Thexton in the V8 Supercar Championship, as well as the Konica series, going on to have a stint in sports sedans and the Kumho series between 2005 and 2010.

Chad Parrish will pilot a 2003 Ford Falcon BA that made its debut at Queensland Raceway in ’03 in the hands of David Besnard, who campaigned the remainder of the season in the car. It moved into Craig Lowndes’ hands for the 2004 season, picking up second at Eastern Creek and second at Bathurst, with Glenn Seton joining the driving roster for the great endurance race.

The car was sold to Jason Bright’s team Britek Motorsport for 2005, achieving a best finish of 13th at the Clipsal 500 in the hands of Steve Owen. In 2006 it went to Warren Luff, who drove it to 16th in the Clipsal 500, before Jason Bright jumped back on board for 2007 and into ’08 before they debuted a new chassis.

Neil Schembri drove as a privateer in the Supercars championship throughout the ’90s. His Perkins Engineering 1995 Holden Commodore VS was originally built for David ‘Truckie’ Parsons, and won the Privateer’s Dash at the 1996 Bathurst ATCC round. It went on to be the top finishing privateer car in the ’97 Sandown 500.

The car was campaigned at Bathurst in the hands of Bruce Williams and Paul Gover in ’97, but didn’t complete the epic. Robert Smith and David Parsons ran the car at Bathurst in 98 but again didn’t see the chequered flag.

In 2005 the car set the top speed record for a V8 Supercar at the Dry Lakes Racing Association Speed Week event in South Australia, recording a top speed of 313km/h. Brad Neill campaigned the car later on in life in the Kumho series with some good results.

Schembri has repainted the car to resemble his old Gearbox Motorsport (PE 25) car from the ’97 Supercars championship.

Peter Xiberras is the custodian of the Premiair Racing (top fuel drag racing and Supercars championship) 2002 Holden Commodore VX. This car is the first Garry Rogers Motorsport chassis built in house, (VT01) and is the sister car to the 2000 Bathurst winner (VT02), still retained by Garry Rogers Motorsport. It is presented in identical livery.

The car also finished 9th at Bathurst with Owen and Ritter, and was Leanne Tander’s (Ferrier) car in the development series in 2001. Leanne achieved the first podium finish for a female driver in Supercars at Wakefield in this car.

Mal Rose purchased the car in ‘06, and used it only once at an overseas endurance race before being restored by the previous owner between 2019 and 2019.

We’re thrilled to welcome Australian 5-Litre Touring Cars to the Sydney Classic, and look forward to seeing the cars in action amongst an exciting entry of historic sport and racing cars at Sydney Motorsport Park over the 11th and 12th of June, 2022.

Spectator passes are available online in the lead-up to the event and will be available at the track on the day.